Dr. Philmus is an Associate Professor in the College of Pharmacy, Department of Pharmaceutical Sciences. He has been involved in natural products research since his doctoral research under the direction of Prof. Thomas Hemscheidt at the University of Hawai‘i, in the Department of Chemistry. Dr. Philmus’ doctoral research initially focused on natural product isolation and structural characterization from cyanobacteria utilizing both 1D and 2D NMR spectroscopy, mass spectrometry, chemical degradation and derivatization, and chemical synthesis. Dr. Philmus then focused on biosynthesis of cyanobacterial compounds using a combination of precursor labeled incorporation studies, heterologous expression of proteins in Escherichia coli, and in vitro reconstitution of enzymatic reactions. Dr. Philmus then took up a postdoctoral research position at Texas A&M University under the mentorship of Tadhg Begley. His postdoctoral research was heavily invested in dissecting complex biosynthetic mechanisms for natural product biosynthesis and degradation, as well as the biosynthesis of the cofactor, F0. During his tenure at Texas A&M University Dr. Philmus learned how to handle radical SAM enzymes, which are notoriously difficult to work with due to their oxygen sensitivity as well as in vitro NMR monitoring of enzymatic reactions and enzyme kinetics.Jes

Jessee joined the lab in Spring 2019 and has focused on strain engineering and development of new tools, vectors and techniques for the heterologous expression of cyanobacterial natural products.

Daniel joined the lab in Spring 2019 and has a deep interest in synthetic methods and technique development. Daniel has been working on ruthenium click chemistry to label alkyne natural products to aid in compound identification. 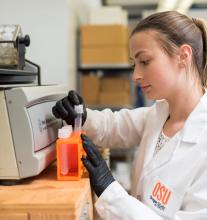 Savannah joined the Philmus lab to investigate the biosynthesis of triazine natural products using a combination of molecular biology and analytical chemistry.

Dr. Khaled Almabrk
Dr. Almabruk obtained his PhD from Dr. Mahmud's lab at Oregon State University in Oct. 2016. He joined the Philmus lab in Dec. 2016. He focused on two projects during his tenure including isolating natural products that we have identified using our genome mining method. He was also involved in investigating the biosynthesis of the triazine natural product, toxoflavin. Dr. Almabruk is now a Principal investigator and Scientist at Gadusol Labs (link) a startup company in Corvallis. 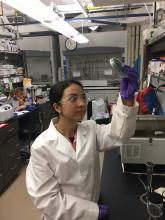 Brenda joined the lab in June 2018 and worked on the biosynthesis and heterologous expression of cyanobacterial natural products. She graduated with a M.S. degree in Spring of 2019 to pursue her dream job.

James joined the lab as a rotation student in June 2018. He focused on the biosynthesis of 1,2,4-triazine natural products and graduated with an M.S. degree in Spring 2019.

Linh Dinh
Ms. Dinh is an undergraduate researcher that is involved in developing PCR based methods to mine bacterial genomes for the potential produce natural products based on self-resistance.

Kaitlyn Wells
Ms. Wells was a 4 year undergraduate researcher in the Philmus lab who focused on developing Escherichia coli as a general host for the expression of cyanobacterial natural products. She graduated from OSU in 2017 with an Honor's degree.

Andrew Senner
Mr. Senner was an undergraduate researcher who focused on the isolation of soil microorganisms and screening them for the production of bioactive natural products. He graduated from OSU in 2015.