History of the College

The College of Pharmacy at Oregon State University can trace its beginnings back to 1898 at what was then the Oregon Agricultural College. Chemistry and pharmacy were in a single department and students could graduate with a Bachelors of Science (B.S.) degree in Pharmacy upon completion of a four-year program. This was one of the earliest four-year programs in the country.

Pharmacy and Chemistry were separated, and five years later the first graduate program was established, allowing students to earn their Master’s in Science (M.S.) degree in Pharmacy.

The established Department of Pharmacy became the School of Pharmacy and Professor Adolph Ziefle was appointed as the first dean.

Dean George Crossen recognized a need for additional training to become a pharmacist and reformed the curriculum again to construct a five-year program leading to the B.S. degree in Pharmacy. OSU became only the second five-year program in the country, nine years ahead of the accreditation requirement that all pharmacy programs have a five-year curriculum.

The School of Pharmacy expanded the graduate program to include the Doctor of Philosophy (Ph.D.) degree in pharmacy, helping elevate the national stature of the program and attracting the strongest faculty.

During his time as dean, Dr. Richard A. Ohvall saw a need for pharmacists to have increased experience in patient care and the curriculum was altered to enhance the patient-oriented pharmacy education by expanding clinical components, adding courses such as Communications Skills, and increasing student effectiveness in total patient care. 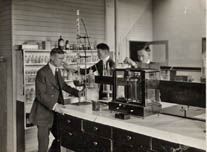 Under Dean Ohvall, the School of Pharmacy became the College of Pharmacy. 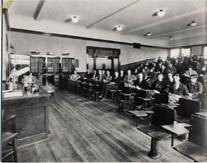 The College of Pharmacy began offering the Doctor of Pharmacy (Pharm.D.) as the sole professional degree. This was to comply with a mandate by the Accreditation Council on Pharmaceutical Education that all future pharmacy graduates must possess the PharmD degree to become licensed. The transition to the PharmD program necessitated additional clinical curriculum and led to closer ties with Oregon Health & Science University (OHSU).

Dean Wayne Kradjan signed a Memorandum of Understanding with OHSU that formally established a unique degree program with both universities jointly awarding Doctor of Pharmacy degree.

After World War I, enrollment increased at the School of Pharmacy and Dean Ziefle saw a dire need for the School to have it’s own building. In 1923 construction was authorized and in 1924 the Pharmacy Building on the Corvallis campus was completed.

Forty years later, in the 1960s, Dean Charles O. Wilson recognized the need for improvements and enlargements to the building to accommodate needs of the new curriculum and the growing research programs. Funding was obtained from the Oregon Legislature and the National Science Foundation for renovations and additions. The existing floor space for the School of Pharmacy was nearly doubled when the addition was completed in 1966.

As the patient-oriented curriculum developed, a formal affiliation with OHSU was negotiated that provide joint faculty appointments and clinical practice sites for several pharmacy faculty. 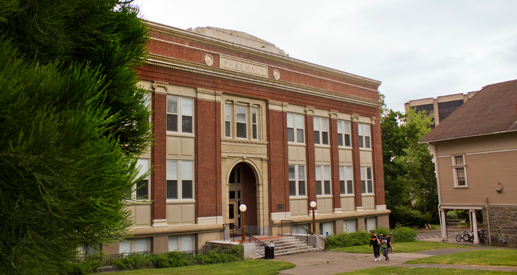 In 1988, space was acquired from OHSU and an assistant dean for Pharmacy Practice position was recruited - formally establishing a satellite campus for the OSU College of Pharmacy in Portland.  In 2006, the OSU Portland operations moved from the main campus on Marquam hill to the Center for Health and Healing (CHH) building on the Portland’s South Waterfront. For the first time, the College of Pharmacy had a dedicated space for classes, labs, a student lounge, clinical practice and computer labs at the Portland Campus. 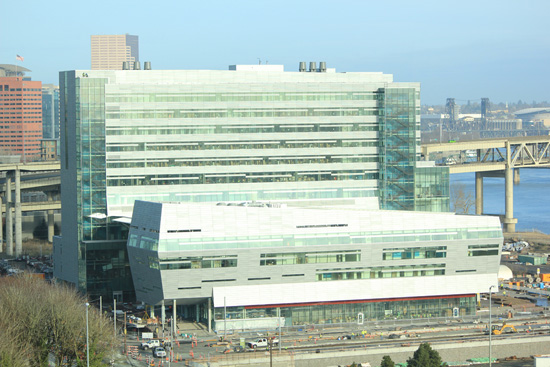 July 2014 marked another milestone for the College of Pharmacy’s evolution in Portland with the opening of the Collaborative Life Sciences Building (CLSB) on the OHSU South Waterfront campus.  The building is a partnership between OSU, OHSU, and Portland State University (PSU).  All three universities have designated space for classes, labs, research, and faculty.  The College of Pharmacy has a 150-person theater-style lecture hall, three 25-person classrooms/clinical practice labs, space for eight Portland based faculty members, and a six-fold increase in research laboratory space in Portland.  The Dean at the time, Mark Zabriskie, believed that the CLSB would provide an innovative educational environment for pharmacy students to develop an interprofessional and patient-focused approach to health care. Dr. Zabriskie was also proud of the new opportunities for collaborative research that the Collaborative Life Sciences Building was designed to promote.